Marijuana on the 2020 Ballot 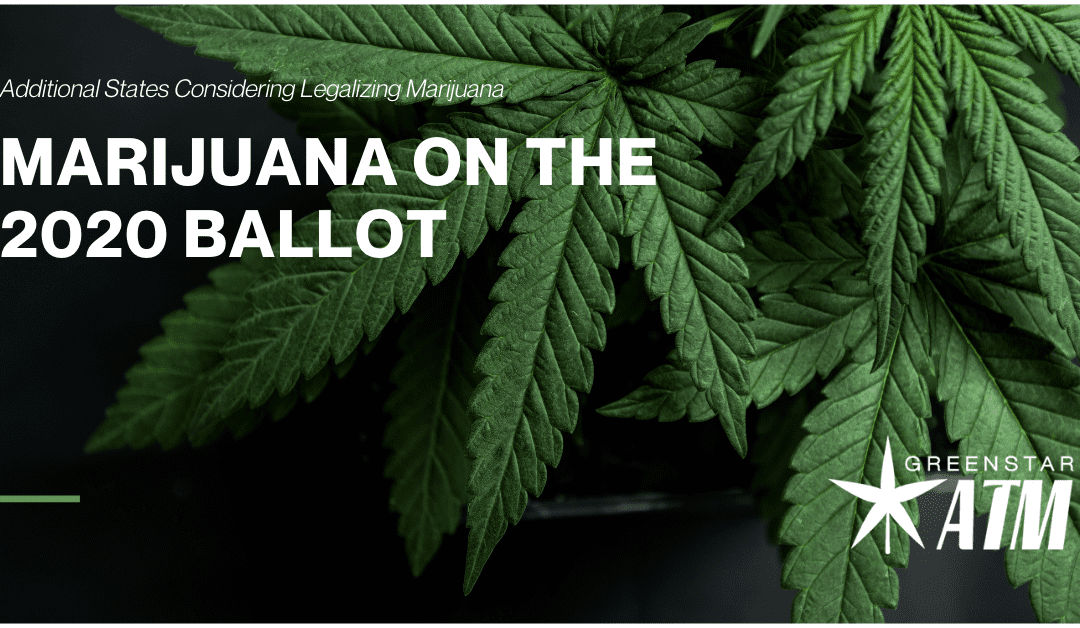 The 2016 election included a variety of measures to state and local ballots. In fact, cannabis was legalized in eight out of nine states. 2020 is already a big election year with a presidential race that is perhaps the most contentious in history.

A part of what is making the 2020 ballot so important across the nation is the continuing question about whether or not to legalize marijuana. Currently, 33 states have legalized medical marijuana. Additionally, 11 states and the District of Columbia have legalized marijuana for recreational use. These states include: Alaska, Washington, Oregano, California, Nevada, Colorado, Illinois, Michigan, Massachusetts, New Hampshire, and Maine.

In 2020, there are five additional states that are considering legalizing marijuana:

In 2016, voters narrowly defeated a measure to legalize recreational marijuana – by just about 67,000 votes. This time around Proposition 207: The Smart And Safe Arizona Act would allow, “limited marijuana possession, use, and cultivation by adults 21 or older; amend criminal penalties for marijuana possession; ban smoking marijuana in public; impose a 16% excise tax on marijuana sales to fund public programs; authorize state/local regulation of marijuana licensees; and allow expungement of marijuana offenses.”

Mississippi has two competing measures on it’s ballot to legalize medical marijuana: Initiative 65 and Alternative 65A.

Initiative 65, included on the ballot as a result of citizen advocacy, would allow legalized medical marijuana usage by patients with qualifying conditions. Medical marijuana would be provided by licensed dispensaries and would permit health care givers to administer marijuana dosages to debilitated patients.

The alternative proposal, 65A, was proposed by Republican state legislators and would “restrict smoking marijuana to terminally ill patients; require pharmaceutical-grade marijuana products and treatment oversight by licensed physicians, nurses, and pharmacists.”

Through September 20, almost $5 million had been contributed to support Initiative 65.

Like Mississippi, Montana also has two marijuana initiatives on the ballot this year. Ballot issue I-190 would allow for recreational marijuana usage by adults. Initiative CI-118 establishes the age of 21 as the legal age to purchase, possess, and use marijuana.

New Jersey Governor Phil Murphy was elected in 2017 and has been a strong supporter of legalization in the state. However, after legislative support for legalization has been hard to come by, state supporters decided to put the measure before voters.

New Jersey’s Public Question 1, “Proposes constitutional amendment to legalize cannabis for personal, non- medical use by adults who are age 21 years or older, subject to regulation by Cannabis Regulatory Commission.”

Also, according to Ballotpedia, “The ballot measure would not provide additional specifics, such as possession limits, home-grow rules, and retail regulations; rather, the legislature and CRC would need to enact additional laws and regulations.”

To date, no PACs that are registered to support Public Question 1 have filed campaign finance reports.

In South Dakota, voters will decide whether or not to legalize marijana both for medical and recreational purposes.

Measure 26, which would legalize medical marijuana usage “by qualifying patients, including minors.”

According to Ballotpedia, South Dakota’s Constitutional Amendment A “would legalize the recreational use of marijuana for individuals 21 years old and older. Individuals would be allowed to possess or distribute up to one ounce of marijuana. The amendment would require the South Dakota State Legislature to pass laws providing for a program for medical marijuana and the sale of hemp by April 1, 2022.”

With the potential of adding five new states into the ranks of legalized marijuana, at least in some format, one has to wonder when the federal government will finally take up the green wave and make the criminalization of marijuana a thing of the past.