What does a Biden Administration Mean for the Cannabis Industry? 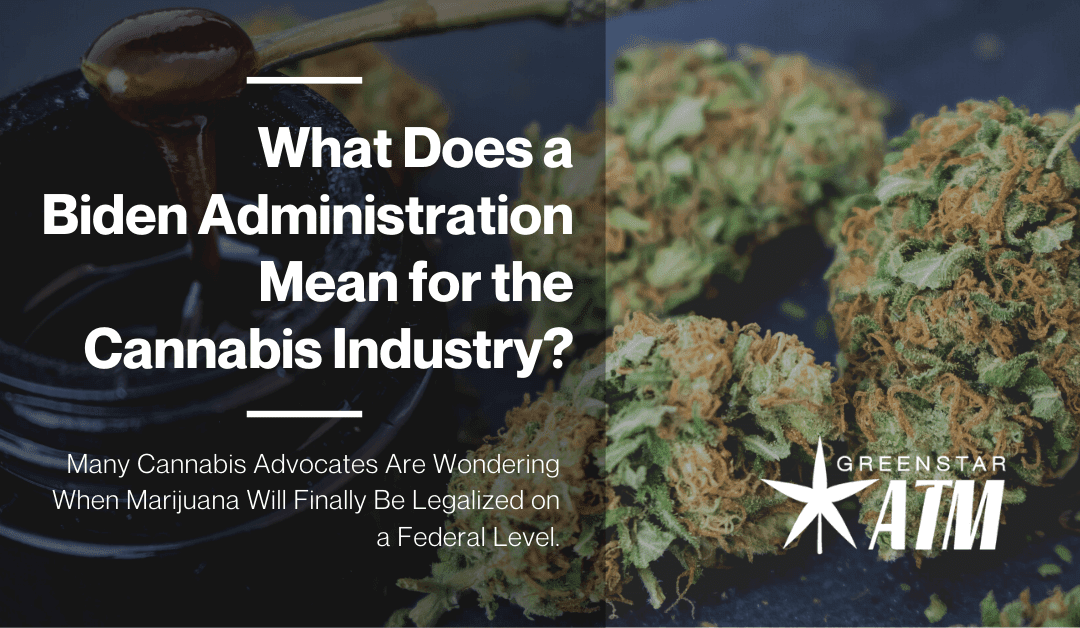 When Joseph R. Biden was sworn in as the United States’ 46th President on January 20, 2021, he hit the ground running. President Biden has already signed a plethora of executive orders ranging from immigration policies to protections for the LGBTQ community to extending healthcare enrollment on HealthCare.gov.

Now, with a Biden-Harris administration and Democrats controlling both chambers of Congress, many cannabis advocates are wondering when marijuana will finally be legalized on a federal level. Currently, 15 states plus the District of Columbia have fully legalized marijuana. An additional thirty-six states have legalized medical marijuana usage.

Interestingly, marijuana legalization seems to be one of the few things that Democrats and Republicans can agree on. In late November 2020, the Democratically controlled House passed the Marijuana Opportunity Reinvestment and Expungement (MORE) Act, which would “remove marijuana from the schedules of controlled substances under the Controlled Substances Act (CSA), legalizing many marijuana-related activities at the federal level.”

And in January 2021 Rep. Greg Steube (R-FL) filed a proposal that would remove marijuana as a Schedule I substance and make it a Schedule III substance in the Controlled Substances Act (CSA).

While these are both positive moves, industry advocates say that they don’t go far enough. It might be a difficult challenge to get the Senate to pass it’s own version of the MORE act, and to push for anything less than full legalization if both an economic and racial travesty.

An April 2020 report by the ACLU states that, “Two out of three Americans — more than ever before — now support marijuana legalization.” The report also states that, “While overall marijuana arrests have decreased at the national level since 2010, the rate of decline has stagnated and, in recent years, has even reversed upwards despite popular reform movements. Marijuana arrests are still widespread nationwide, making up 43 percent of all drug arrests — more than any other drug. The vast majority of these arrests — nine out of 10 — are for possession.”

Black people in America are affected by marijuana laws are numbers far higher than their white counterparts. The ACLU found that, “Nationwide, Black people are 3.6 times more likely than white people to be arrested for marijuana, despite similar usage rates.”

With racial inequities at the forefront of American’s minds after the death of George Floyd, changing marijuana laws to be more in line with American’s support of cannabis seems like a no-brainer.

To that end, advocacy groups, such as the National Cannabis Industry Association (NCIA) will be looking to lobby to accomplish the following in the following couple of years:

With Democrats in charge of two of the three branches of government, cannabis advocates are hoping that this is finally the time to make lasting, bold, and sweeping changes to marijuana laws nationwide.