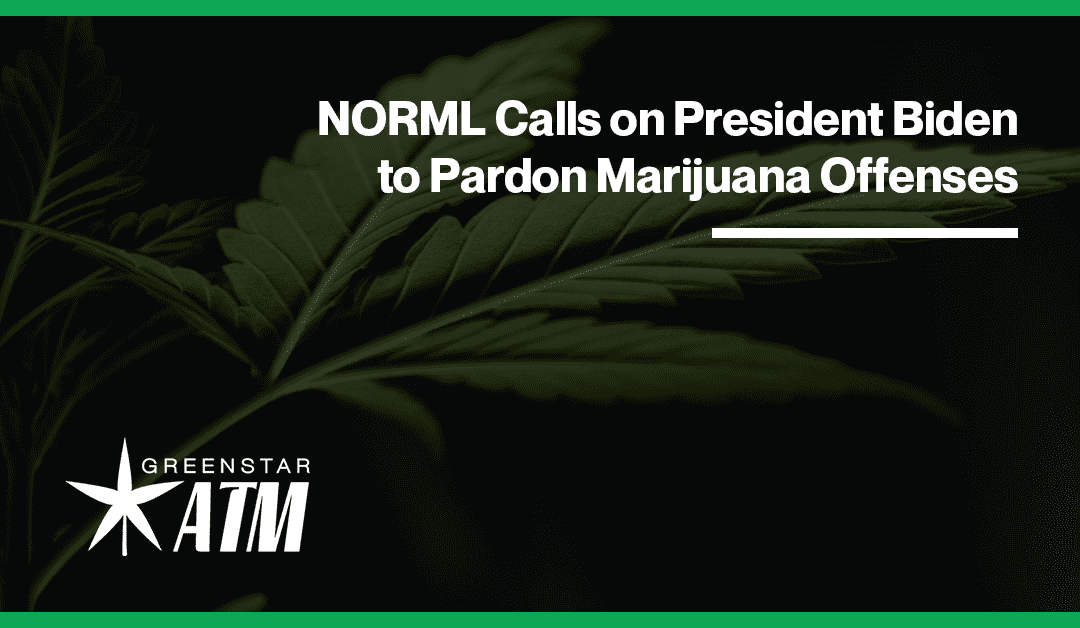 The National Organization for the Reform of Marijuana Laws (NORML) has recently called upon President Biden to fulfill a campaign promise by expunging the criminal records of people with non-violent marijuana convictions.

In a letter sent to the White House on February 15, 2021, representatives from NORML and several other cannabis advocacy groups urged President Biden to “clearly demonstrate your commitment to criminal justice reform by immediately issuing a general pardon to all former federal, non-violent cannabis offenders in the U.S. In addition, all those who are federally incarcerated on non-violent, cannabis-only offenses for activity now legal under state laws should be pardoned and their related sentences commuted. Cannabis prohibition ruins lives, wastes resources, and is opposed by a large majority of Americans. Two out of every three states in the U.S. have abandoned the federal government’s blanket prohibition and now provide safe and regulated access to cannabis for adults and/or those with qualifying medical conditions. And Illinois Gov. J.B. Pritzker has showcased the important role of clemency in achieving justice and equity with cannabis reforms through his recent work pardoning or expunging nearly half a million prior cannabis convictions.”

The letter highlights the fact that Biden himself has called for these changes. In a November 2019 Democratic Primary Debate, Biden himself stated, “I think we should decriminalize marijuana, period. And I think everyone – anyone who has a record – should be let out of jail, their records expunged, be completely zeroed out.”

Marijuana laws disproportionately affect people of color. The group’s letter to President Biden goes on to say, “While the war on cannabis impacts individuals of all races, a disproportionate number who enter the criminal justice system are people of color. On your first day in office, you signed an executive order rightly stating that, “Our Nation deserves an ambitious whole-of-government equity agenda that matches the scale of the opportunities and challenges that we face.” Today, the long-term harm of cannabis prohibition in communities of color throughout the country is profound. As we look to solutions to provide healing, the dangerous policing tactics that were developed to execute the war on marijuana, including no-knock warrants and other aggressive tactics, shock the nation and have led us to historic levels of mistrust. When a large majority of Americans no longer believe cannabis should be illegal, aggressive enforcement tactics quickly lose support. A general pardon of all former and current federal non-violent cannabis offenders would be the kind of grand, ambitious, and impactful action that would effectively signal to marginalized communities that their suffering is seen and that the government seeks to remedy their harms.”

Advocacy groups aren’t the only ones to make this plea to the president. Congressional Cannabis Caucus co-chairs Rep. Barbara Lee (CA-13) and Rep. Earl Blumenauer (OR-03) have also advocated for clemency for nonviolent cannabis offenders. “Even before Congress sends President Biden a marijuana reform bill to sign, he has the unique ability to lead on criminal justice reform and provide immediate relief to thousands of Americans. We urge President Biden to grant executive clemency for all non-violent cannabis offenders and look forward to working with him and the incoming Attorney General on quickly making this a reality.”

The marijuana tide appears to be turning, with more and more Americans supporting legalization of marijuana and advocating for marijuana laws more in tune with these shifting priorities. In the early days of the Biden-Harris Administration, it remains to be seen whether these pleas will be heard.